Christmas time, play with us!

Christmas is here! And some free time as well. How should we take care of it? Out of Pluto has a suggestion for you: a videogame from the good old times. It has been recoded by Anthony Baillard, the president of Out of Pluto. He wanted to amuse not only himself but you as well. Its name is picomaze.

This videogame seems quite old, but that is normal, it is retrogaming!

You may remember midimaze, a game from 1996. Some smileys wonder in a maze (cute music …) and the player’s smiley shoots them (loud music). There are real players behind some of the smileys, an artificial intelligence behind others. Back then the algorithms were not very performing and the smileys could be very dumb, dumb and not so dumb… In any case, they were… dumb.

picomaze has been coded using a retrograming platform that comes with the computer C.H.I.P. (at 9 $) for NextThingGo. This platform’s name is Pico 8 and it has been developed by Lexaloffle. Their goal is to propose a fantasy console whose are easy to write. It has the particularity of having few colors and pixels, just like the 8 bit computers that existed during the eighties! Obviously, you must be a bit of a geek to want to play with 16 colors games with huge pixels when you have a resolution of 128x128 pixels.

midimaze was an Atari ST game. This computer was conceived for musical purposes: its MIDI ports could be connected to a keyboard, a synthesizer and a sound instrument to record or send music. Some computer lovers found another use for the MIDI interfaces: to connect several Atari together in order to be able to have sixteen players in the same maze (the MIDI format had 16 channels for music, each one for a smiley). One player: one computer: it was the birth of online gaming!  All the games MMO FPS (Massive Multiplayer Online First Person Shooter) that now exist are the grandchildren of the midimaze.

What is the interest of picomaze? Well, if you have not found it yet… There is its “out of phase with reality” charm. It does not look like a war game, it is completely unrealistic: you shoot smileys in a maze. For the moment, there is only one player, the others are artificial intelligences. You need to kill three smileys to win the game. 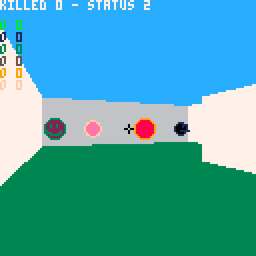 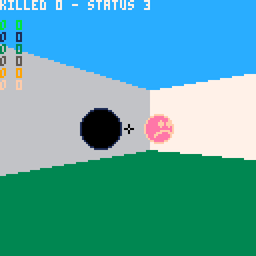 Screenshots of picomaze. Credits: Out of Pluto

The picomaze is not still finished, some improvements will come: online gaming, better AI, a superior 3D engine… You can contribute to create new versions through the github page.

You can find picomaze at www.outofpluto.com and also at the lexaloffle site. They propose a collection of games, named cartouches, as if we were playing with old consoles…