Out of Pluto presents La Caverne at the Nuit Blanche

The time to wait until next session is shown using a countdown. Many passers-by choose to stay and wait, seating on the pavement or on the banks of the Péniche Le Marcounet. Others follow their path. The screen is two meters forty centimeters high by three fifty wide, it seems tiny in the middle of the quays.

Something is going on! A dark silhouette appears, moves closer to us and then farther, loses its head… And lights! Light spots in different colors arise in the dark and pull the silhouette to one side, to the other, upwards, downwards… As if the silhouette was prisoner of the technology. Like we are? But the prisoner, that is his name from now onwards, tries to escape. He contorts but he is trapped among lights and colors. Finally, with considerable effort, a white light arises, then another. He makes it, he gets his free will back!

The public is curious, and that is good. They wonder whether there is a real dancer or they are just watching a projection. Some people spy behind the screen, they want to know what happens there. And there they see a modern puppeteer with a computer, and a mime whose body is full of cables connected to an Arduino minicomputer. 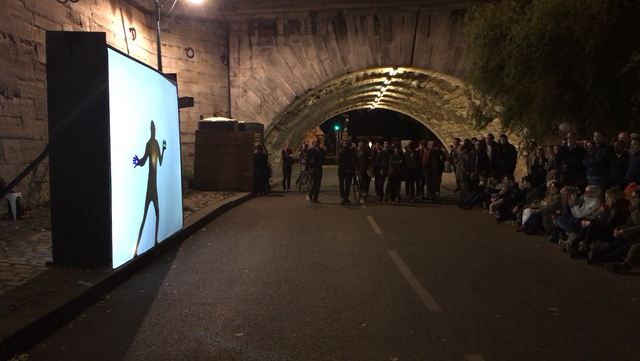 In twenty minutes the mime will again try to escape… It does not rain, but it is cold. The winter has visited the Nuit Blanche 2016. Just before the summer, the project La Caverne started to grow. What’s the story?

For the 2016 Nuit Blanche edition on the subject of crossing over (franchissement). Anthony Baillard has created a light and shadow performance, a new interpretation of Plato’s “Allegory of the Cave”, in which a dancer is kept prisoner behind a translucent screen. He has worked with the start-up Out of Pluto.

The “Allegory of the Cave” has numerous philosophical ramifications. What particularly interests Baillard is the revelation moment, when the prisoner has freed himself from his chains. When he discovers and has to accept that the world is infinitely more complicated, and rich, than he thought the previous moment. First he must perceive it, then he must conceptualize the new reality and study how to apprehend it. The three steps of overcoming: perception, comprehension and action. Baillard defends that “the apprehension of our habitat becomes an image. An image, mental or physical, is always an interpretation, a distortion of reality due to our perception.”

Behind a translucent window, a dancer is “prisoner”. But he is not physically in his chains, it is his perception of their universe that is jailed. The spectator can only see his shadow. He lives in two dimensions and his movements show his limited perception of himself. He will have to fight this vision, discover that his view of himself and of his surroundings is incomplete, and understand what implies to be free.

The art piece proposes several allegoric views. The screen works as a barrier between the spectator and the dancer, between the real world and a world of illusions. The characters face life problems and the loss of innocence that comes with knowledge. The control of the environment achieved thanks to modern technology questions, to a certain extent, what constitutes Plato’s cavern ontology.

Light means color and color means Kandinsky! In Du Spirituel dans l'art et dans la peinture en particulier, Kandinsky builds a theory about the inner necessity, that is, the way art reaches the human soul. In the second part of his essay, he applies this theory to color and deduces a set of rules according to the effect of each color on the spectator. In particular, he explains the feeling of movement related to each color using pairs of contrasts. For instance blue for concentric moves and yellow for eccentric moves. 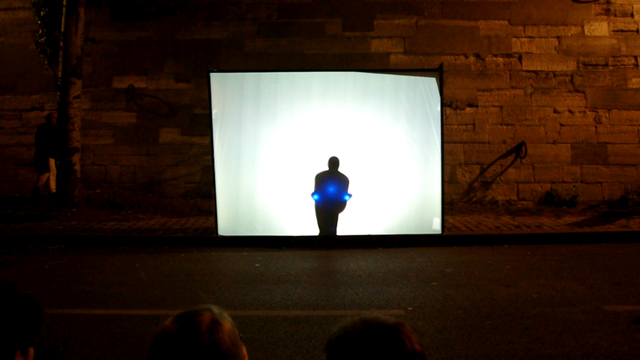 These pairs of contrasts, and ultimately, the inner necessity so important to Kandinsky will guide the corporal language of La Caverne!

Credits for all the images: La Caverne/Out of Pluto